We all know about the awesome combinations of peanut butter and jelly, rum and coke and Shaggy and Scooby, but what about London and Paris? Both cities are great – but it’s together that they create the world’s most perfect pairing.

For the first time ever, Paris and London are joining forces to show how easy it is to discover both as one amazing destination – via the Eurostar which takes just over 2 hours. 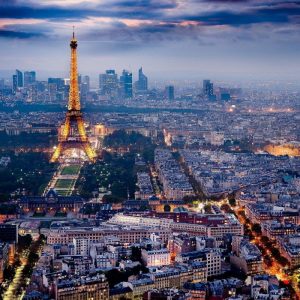 Of course, exploring Paris and London’s abundance of museums, galleries, restaurants and historic sites will take time, so intrepid explorers are being urged to pack their bags NOW for Europe’s coolest new destination for 2019, knowing they can return again and again over a lifetime to uncover more.

London and Paris for Foodies:

Famous food writer Mary Frances Kennedy Fisher once said: “first we eat, then we do everything else.” If this food-centric approach to travel strikes a chord, then you’ve come to the right place. London and Paris restaurants have earned a total of 177 Michelin Stars, the most sought-after award in the culinary industry.

With all this choice, your only problem may be trying to choose between Dinner by Heston Blumenthal or dining at L’Arpège – or you can have both!

For something less high-end, you’ll be spoiled for choice with 62,753 (!) restaurants to choose from. Whether you’re in the mood for a macaron and café crème at Ladurée Champs-Elysées or a vegetarian brunch at Darwin’s Brasserie at Sky Garden in the City of London, you’ll have no problem hitting the spot.

Not in the market for a sit-down meal? You can immerse yourself in the bright colors, alluring smells and hustle bustle of London’s Borough Market, where you’ll be tempted by cuisines from all over the globe, or you can take a step back in time to Paris’ famous covered market Marché couvert les Enfants Rouges, which opened in 1615.

After you’ve feasted to your heart’s content, take your pick from Paris and London’s 490+ nightclubs where you can dance off all the freshly baked French croissants, or those warm bagels you picked up from famous Brick Lane Beigel Bake.

Paris and London for Culture Vultures:

If culture is what you’re really looking for on your next European vacation, then both cities have it in spades.

With 325 museums to choose from, including world-renowned icons such as the British Museum, the National Gallery, the Musée du Louvre and the Musée d’Orsay and hidden gems such as the Sherlock Holmes Museum and the MAD – decorative art museum, it’s hard to know where to begin!

See blockbuster exhibitions, such as the highly anticipated Christian Dior: Designer of Dreams exhibition (opening February 2019) at the Victoria and Albert Museum or Michael Jackson: on the wall at Grand Palais (opening November 2018).

There is a wealth of heritage to be found when exploring the streets of Paris and London. Combined, the two cities have over 2,350 listed monuments. Some of the most unforgettable buildings include Cathédrale Notre-Dame de Paris and L’Arc de Triomphe, Buckingham Palace and the Houses of Parliament.

For those with a passion for the stage, take your pick from the 506 theatres dotted across the Paris and London megacity. You can sing your heart out to Matilda the Musical in London’s West End or discover the secret spaces & mysteries of the Palais Garnier, Paris’ stunning opera house.

London and Paris for Dreamers:

Two cities = more to love! Think strolls along the Champs-Élysées then sipping on a cocktail with stunning views over St. Pauls’ Cathedral on the chic rooftop terrace bar of Madison.

There’s nothing more wonderful than discovering a place soaked in history with the people you love most. In the megacity of London and Paris you will find a total of 5 UNESCO World Heritage Sites to discover. From the Banks of the Seine to the Tower of London and Westminster Abbey, you’re bound to fall head over heels for these beautiful and iconic destinations.

London and Paris are also home to an astounding 635 parks and gardens, where you can stroll freely, stopping only to spot the deer in London’s Richmond Park, or get your perfect shot for Instagram at Parc des Buttes-Chaumont . Alternatively, have a glass of rosé at Rosa Bonheur, gaze over the lake at Bois de Boulogne or pack yourselves a picnic and drink a glass of wine as you watch the sun set from the top of Primrose Hill.

You might think you’re all ‘romanced-out’, but London and Paris have over 3,500 hotels where you can finish your day in the perfect way. Be that glamour and chic at Hotel Molitor, with its swimming pool and rooftop terraces that offer up astonishing views of the Eiffel Tower, or relaxing in one of East London’s coolest hipster hotels such as the Scandi-inspired Hoxton Hotel.

Paris and London for the Quirky:

Add a touch of rainbow to your Instagram feed with the curiously colorful houses or cobbled streets which line the path ahead on the enchanting Butte aux Cailles and quirky Portobello Road.

For those who appreciate the darker side of life, why not go on the hunt for some of London and Paris’ spooky secrets: there are plenty of ghostly goings on, with approximately 54 abandoned underground stations underneath the very streets you walk, including London’s Aldwych Station (open to the public for special events) and Paris’ Champs-de-Mars Metro station (opened to the public on Annual Heritage Days).

To uncover the best of London and Paris, visit: www.londonandparis.com