World Cup fever is running rampant throughout the world and right now,  and South Africa  is where its all at. In the spirit of things, I’ve found the perfect article exposing South Africa for everything it has to offer, besides soccer. Read on and click the link to see where your next trip could be! 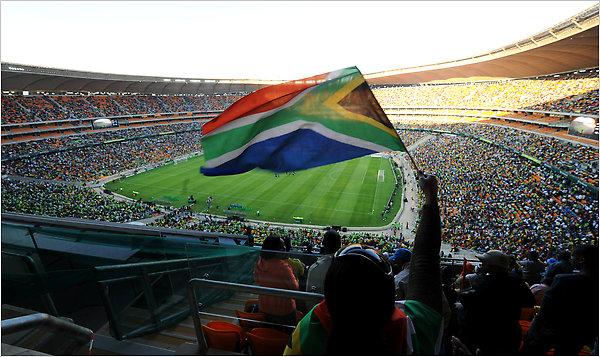 “As hundreds of thousands of soccer fans pour into South Africa to watch the World Cup, we asked residents from five of the nine host cities what shouldn’t be missed. While sharing their favorite things to eat, see and do, they all agreed on a few larger truths: some streets could be safer, the beaches are beautiful, the cities electric and the wildlife unparalleled. This week, with the eyes of the world upon them, they are ready to show it all off.

A self-described “vocal expressionist,” Ms. Mvula, 21, grew up singing, and by the time she was a teenager had decided that she would try to make a life out of it. After boarding school in Grahamstown, she headed to Cape Town for college and started performing her own music on weekends at clubs and events in a style she describes as New Age Soul. But while Cape Town is filled with people who love to be entertained, they tend not to be paying connoisseurs. Which is why Ms. Mvula is currently in Johannesburg where she plans to study with Sibongile Khumalo, one of the few South African singers who has captured an audience both at home and abroad. As for Cape Town, the place she considers home, she has a long to-do list for visitors.

DAY TRIP First: Kirstenbosch Gardens (www.sanbi.org), where you’ll see couples and friends and families having picnics and throwing Frisbees, playing soccer, watching live performances. It doesn’t look real, that’s how beautiful it is. Don’t miss Signal Hill at sunset — it is one of the most exhilarating experiences. Take a cab up and bring a picnic. And you definitely need to head to Camps Bay, the Miami of South Africa. Oh my gosh, the beach — the water is a bit cold, but the beach is beautiful. There’s always entertainment — someone climbing a tree or walking a tightrope or something ridiculous. There’s always music.

SHOPPING The Waterfront (www.waterfront.co.za) is Cape Town shopping at its best. The harbor is right there, and there’s always some form of entertainment — a clown or a jazz band. And then there’s Canal Walk, which is the biggest mall in Cape Town; wear comfortable shoes.

If you want to go more off the beaten path, Kloof Street has a great bohemian vibe, with lots of cafes and cool stores. Also check out Long Street; at its end is a place called the Baobab Mall (at 210 Long Street). It was renovated to be completely eco-friendly, and there are a lot of cool shops you won’t find anywhere else. There’s the best vintage clothing store there and a great second-hand bookshop, Baobab Books (baobabbooks.book.co.za).

RESTAURANT Mzoli’s (27-21-638-1355). People fly from Durban, Joburg, everywhere to eat there. It’s addictive — a butcher shop where you buy raw meat and have them grill it for you. It’s off Klipfontein Road in Gugulethu — a ghetto — which gives you another view of Cape Town life. D.J.’s come, play their music, and you’re eating your meat and your salsa and your gravy. It gets packed. I’m talking about, like, 300 cars packed. It can be a bit overwhelming. There’s also Royale (273 Long Street; 2721-422-4536) on Long Street. Amazing burgers.

LOCAL TREAT Texies Seafoods (texies.co.za). They are all over Cape Town. It could look a bit scary, but after you taste that fish and chips, you’ll understand why you have to go there.