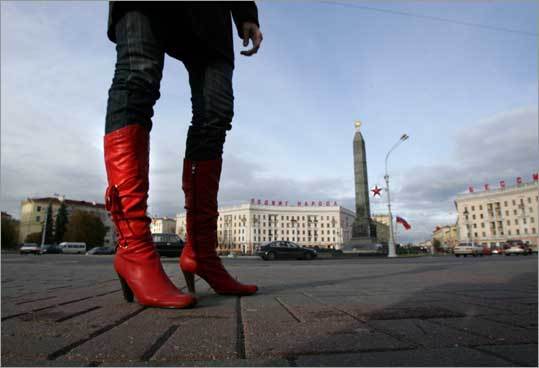 A new article by the Boston Globe‘s Tom Haines shows the struggles for those living in Belarus to overcome the troubles of the past and move on. Haines writes about the neighbors of Belarus moving on and doing well, yet Belarus itself is still struggling to find itself. Here’s a sample from the article.

Two months earlier, another performance in this same house by this same troupe, Free Theatre, ended before it began when police arrested actors and audience alike. To get to tonight’s show, individuals stood near a bus depot in the October dark, then followed a man with a backpack up one street, down another, behind the house, and in.

The lean-faced actor stoops at center stage, and there is complete and uncertain silence. Then: CRACK!

With the onstage explosion an actress strides in, arms waving, voice bellowing silly scales. She belts national anthem lyrics from Soviet days in a style that is bold and mocking: “WE BELARUSIANS!” She urges her imaginary students: SING!

In this land-locked edge at the geographic center of Europe, expression still battles repression behind borders that defy time.

Neighbors north and west – Latvia, Lithuania, Poland – have joined the European Union, bringing its boundary closer. Even Russia, just east, has collapsed toward capitalism and risen mightily, if not so democratically, again.

Yet Belarus braces beneath the dictatorial rule of President Alexander Lukashenko, who tries to control industry, information, and ideas.

In the makeshift theater, the singer gives way to an actor tapping a raucous melody on a tinny toy piano, and an actress with steel blue eyes holds up a child’s worn nightie: memories of kindergarten. This show, titled “Childhood Legends,” goes on without police interference, and actors tell personal tales: a father’s lament for a suicidal son, a daughter’s struggle with a father behind bars.

Such open dialogue and self-examination have not been possible for Belarus, a country of 10 million people that is not even two decades old. Yet on the inside, even with Lukashenko’s campaign for conformity, opinions are everywhere.

Read the rest of the article at Boston.com