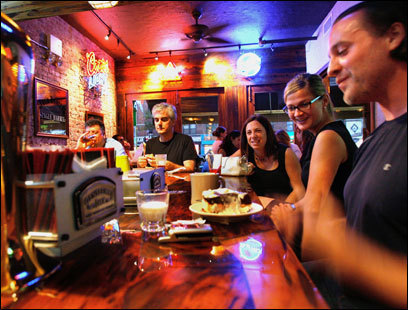 Every now and then a celebrity will open up a restaurant with big hopes, but after the hype dies down, the restaurant can suffer the same fate as other new restaurants. In a new article in The Boston Globe, Meredith Goldstein and Christopher Muther talk about going to celebrity restaurants in New York City, including P. Diddy and Justin Timberlake. Here’s a selection.

We arrive in New York on a sultry Saturday afternoon with an ambitious plan to dine at seven celebrity-owned restaurants around the city. Our starting point is Sugar Bar, an Upper West Side club owned by Ashford and Simpson, the husband-and-wife team who wrote big hits for Marvin Gaye and Diana Ross before turning into stars themselves with a massive chart single called “Solid.” The inside of the club resembles a Caribbean shack decorated by an African interior designer, with a thatched roof and tribal masks hanging on the wall. Because we arrive promptly at 5, we pretty much have the run of the bar, and, more importantly, the handsome bartender, to ourselves.

There is no sign of Nickolas Ashford and Valerie Simpson. The bartender says the couple is usually here on Thursday nights for the weekly open mike. We demolish a plate of guacamole and down the peach fizz cocktail, all the while hoping to see Diana Ross. Ashford and Simpson wrote “Ain’t No Mountain High Enough” for her, and she has been known to enjoy an occasional alcoholic beverage. The lady could come by and show some love. But, after an hour, there is no sign of Ross, so we depart for some of Timberlake’s Southern Hospitality.

Read the rest of the article on Boston.com