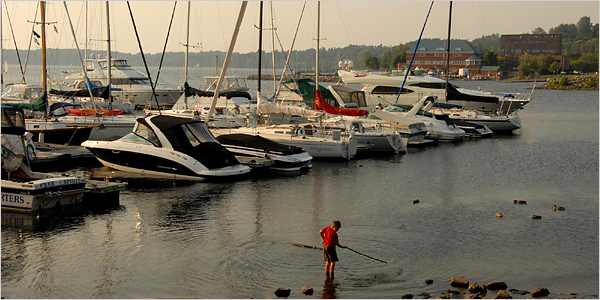 Though Burlington, Vermont, might seem like a smaller city without much to do, it remains Vermont’s biggest city. Over the years, the city on Lake Champlain has undergone many changes, as Marialisa Calta of The New York Times explains in a new article.

Burlington — which, with about 39,000 residents, is Vermont’s largest city — is rediscovering an asset long hidden in plain sight: Lake Champlain, a waterway that transported people and merchandise and, said Mr. Cohn, brought the city into existence. The Lake Champlain Maritime Museum, which has its main campus south of Burlington in the city of Vergennes, keeps the Lois McClure — a replica of a canal schooner — on the Burlington waterfront, and maintains a small exhibit space there.

In the second half of the 19th century, Mr. Cohn said, the lumber business thrived, and waterfront acreage was created with fill “just to have more land on which to pile more lumber.” But by the 1930s and ’40s, the waterfront had become primarily a storage place for oil tanks. Melinda Moulton, a local entrepreneur who bought land there in the early 1980s, remembers touring sites with a squirt gun in hand, to keep the rats at bay. Just three steep city blocks from the always-bustling Church Street Marketplace — a pedestrian mall developed in 1981 and frequented by residents, visitors and students from the nearby University of Vermont — the waterfront lay neglected.

Read the rest of Calta’s article on NYtimes.com.