When In Rome, Forget Vespas 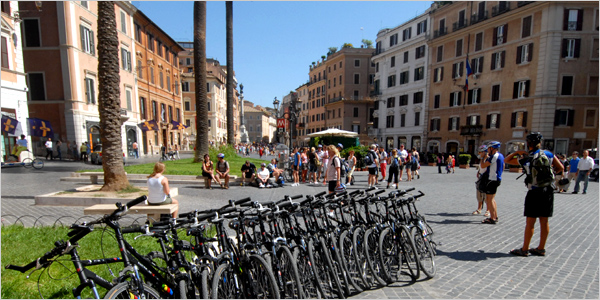 If you’ve been to Rome, or any Italian city for that matter, you know about the traffic jams and confusion that comes with driving in the city. Even if you’ve never been, you can probably picture crowded narrow streets with scooters shooting by and horns blaring. There’s a new way to get around in Rome now, and it still has wheels. The bicycle is becoming ever more popular, as Finn-Olaf Jones of The New York Times discovered in a recent trip to the ancient city. Jones writes,

CAESAR, clad in a bedsheet toga, lighted a morning cigarette next to a centurion wearing a plastic helmet. Both were leaning against a railing on the slope above the Colosseum. But before anyone snapped their photo, I had coasted 300 yards to the Colosseum’s deserted eastern plaza, where it was easier to conjure the lions’ roars and cheering Romans across 16 centuries. Veni, vidi, bicicletti — I came, I saw, I cycled.

Bicycles are a good way to visit the Colosseum.

Subways don’t run through the old part of the city, cabs are often stuck in gridlock, and walkers quickly come to rue the fact that Rome was built on seven hills. But for bicyclists, the Eternal City offers eternal rewards. Rome is, after all, a city of contrasts, best appreciated via rapid mobility between medieval alleyways and airy piazzas, oozing marshes and sycamore-lined heights, crumbled antiquities and Baroque expanses.

Although the city’s hills, old cobblestones and dense streets can make biking difficult for some, it’s now easier than ever to enjoy the sights from the perch of a bicycle seat. The number of bicycle lanes and rental shops and the indulgence of Rome’s otherwise aggressive drivers make biking in Rome convenient. Also, the municipal government occasionally bans private motor traffic in central Rome for a day, making the city a biker’s paradise.

It sounds like a great way to see Rome, and many other European cities. In fact, many bike tour companies are growing and succeeding all over Europe. Read more about Jones’ travels at NYtimes.com.