The Beer of Maine 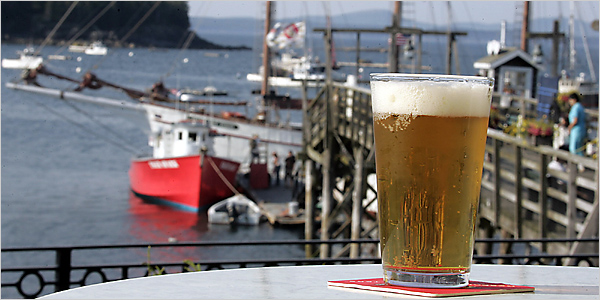 Beer tasting can be a wonderful thing, as Jake Mooney of The New York Times writes in his latest feature. Mooney went up to Maine and explored the brewing process. Here’s a selection.

We were just inside the front office of the D. L. Geary Brewing Company, where two black Labs lounged among the cubicles. The sound that followed, as we passed through a plain door into the back brewery after half a day on the road, was even sweeter, in its own way: Thaddeus Mullen, a stubbled 35-year-old brewer in a T-shirt, jeans and Boston Bruins hat, looked up and said, “You guys want a beer?”

Yes. And we had come to the right place. It may be the blustery weather or it may be the local populace’s stubborn independence, but Maine has grown into a hub of craft brewing, a smaller-scale East Coast answer to Oregon. D. L. Geary, in business since 1986, was a Maine microbrewing pioneer, the first in the state, and for us — a dedicated craft brew drinker and his designated driver who, all things considered, prefers Coors Light — it was the first stop on a satisfying beer tour 170 miles up the coast to Bar Harbor.

Over the course of the weekend, we would find two barns, one shaggy old mule and a tasty blueberry pie, but here at Geary, toting ice-cold bottles of the company’s signature pale ale on a tour through the entire brewing process in the company’s factory, we were surrounded, Willy Wonka-style, by canvas sacks of fragrant hops and big open fermentation tanks of bubbling brew.