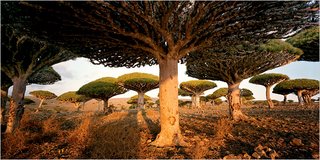 For most of us, the word Frankincense suggests a term only used in biblical times. A mystical rich substance that is reguarded as rare and most likely extinct. However, the unique species of trees that produce Frankincense do still exist in modern times. Tucked away off the coast of Yemen lies Socotra, four isles of granite, limestone and red sandstone plateaus topped with small trees that secrete a rich sweet amber sap known as Frankincense. This area is home to nine species of these distinctive trees that look alot like mesquite. Alan Burdick had the opportunity to discover this exclusive land and shared the wonderment of how these trees have managed to remain in existence unscathed by time for so long.

“Some 250 million years or more ago, when all the planet’s major landmasses were joined and most major life-forms were just a gleam in some evolutionary eye, Socotra already stood as an island apart. Ever since, it has been gathering birds, seeds and insects off the winds and cultivating one of the world’s most unusual collections of organisms. In addition to frankincense, Socotra is home to myrrh trees and several rare birds. Its marine life is a unique hybrid of species from the Red Sea, the Indian Ocean and the western Pacific,” says Burdick.

These rare Dragon’s Blood trees surrounded by vibrant turquoise water dwell in the Gulf of Aden off the Horn of Africa. Up until 1999, there wasn’t even an airport there and could only be reached by cargo ship. The United Nations development plan has opted to try and preserve the natural qualities of the land by paving only a few roads. Socotra has recently caught the attention of tourists but don’t expect flashy hotels if you visit the area. They plan to stick with their locally owned hotels and beachfront campsites to avoid mass tourism.

If you do visit the land be sure and hire a guide. There are few road signs and no road maps. Burdick’s description of the treasures he’s found demonstrates the significance of a local guide to navigate this disguised terrain.

“Ahmed took me to the beach that would have been paved over: shimmering blue water, powdery white sand and not a soul in sight. A ghost crab, pure white, with just its pin-stalk eyes peeking above the water like twin periscopes, drifted by on a current in the shallows. I watched it watch me and then bury itself in the sandy floor,” says Burdick.