Castles Light Up this Summer in Karlsruhe, Germany 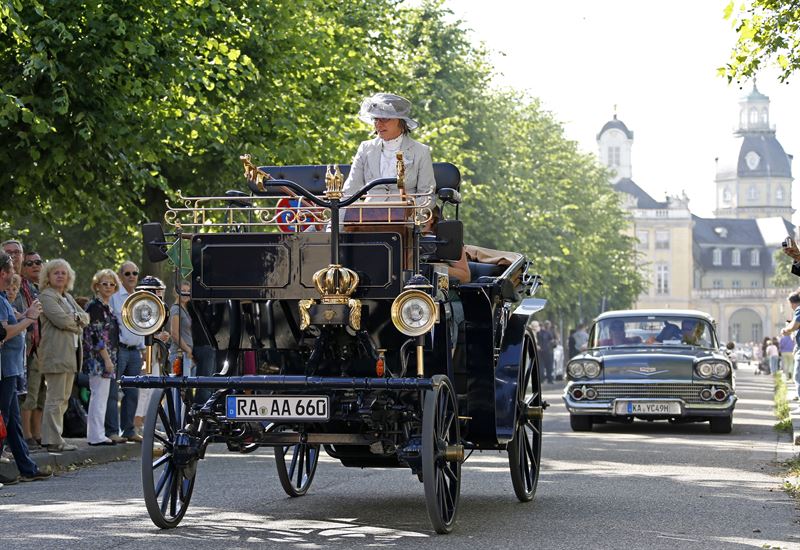 There’s something for automobile lovers in Karlsruhe Germany this summer. An exhibition of historic dream cars will take place in front of Karlsruhe Palace on August 11. The more than 400 classic cars polished to a high shine are sure to attract visitors from near and far.

The exhibition pays tribute to the great invention of Carl Benz in 1886: the first practical automobile. Since Benz was born in a suburb of Karlsruhe, the city is considered the home of the motor car.
https://www.karlsruhe-erleben.de/en/media/events/Tribut-an-Carl-Benz-Oldtimer-Praesentation

Spread your picnic blanket and relax in the palace gardens while enjoying the largest digital work of art in Europe: the SCHLOSSLICHTSPIELE (castle light show). Karlsruhe, the gateway to the Black Forest, almost feels like Woodstock when the city is transformed into a huge open-air stage.

It’s no wonder that there’s so much going on outdoors: Karlsruhe is one of the warmest cities in Germany, boasting 1,800 hours of sunshine a year. Visitors from far and wide can expect an action-packed summer of festivals brimming with culture, shows, and events for all ages!

From August 8 to September 15, the façade of Karlsruhe’s baroque palace is transformed into what is probably the largest screen in Europe. In the light of the 50th anniversary of the legendary Woodstock festival, the theme of this year’s SCHLOSSLICHTSPIELE will be “A Summer of Love and Life. Hate comes late – love comes first”.

The works of Woodstock photographer Elliott Landy will be projected onto the palace façade in full 3D, literally immersing viewers in the spirit of Woodstock. But that’s not all: oversized photographs will be exhibited in downtown Karlsruhe. In addition, shows by other artist groups will take visitors on a magical and fantastical journey.

The Karlsruhe SCHLOSSLICHTSPIELE is a success story: it has attracted around 1.4 million guests since 2015, making Karlsruhe’s Schlossplatz (palace square) the place to be. Start: every evening at nightfall, free of charge.
www.karlsruhe-erleben.de/en/media/events/Schlosslichtspiele-Karlsruhe

International festivals in a summery atmosphere

DAS FEST is a summer event for all ages that will again attract more than 250,000 visitors to Karlsruhe from July 19 to 21. A replica of the iconic Woodstock stage will be set up in Günther-Klotz-Anlage, where party lovers can dance to live DJ sets, reviving the Flower Power movement.

For the last 20 years or so, the grounds of the listed Alter Schlachthof (old slaughterhouse) have given creatives and artists space to develop and evolve. The Tollhaus, a cultural center also located on the grounds of this creativity park, hosts a very special festival in summer: the ZELTIVAL, a festival celebrating cosmopolitanism, tolerance, and cultural diplomacy. From reggae to indie rock, artists from more than 20 nations will thrill festival fans between June 28 and August 4.
www.karlsruhe-erleben.de/en/festivalsommer