Bus Travel Remains a Bargain Across the United States

Intercity Buses in the US are significantly cheaper than in several Latin American countries according to a study which examined the most commonly searched connections in various countries. American buses are less than half the price of Brazil and Argentina, and 40% cheaper than in Mexico. 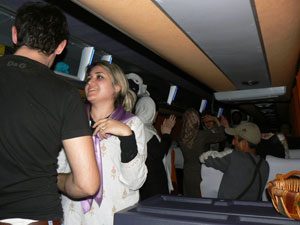 Travel to major coastal cities for some of the cheapest fares On average, the price of bus travel in the US comes to $0.03 per Kilometer traveled which is considerably cheaper than neighboring Mexico at $0.06 or Argentina and Brazil at $0.07. Many of the country’s most affordable routes are between major cities.

Travel between NYC and Boston or Washington DC, which are some of the most commonly searched connections, are only about $10 on average. In the west coast, the popular route between Los Angeles and San Francisco, covering over 380 miles, is only around $13 on average. Journeys between Houston and Dallas as well as NYC and Philadelphia are among the cheapest routes in the country with an average fare of $5.

Competition Amongst Major US Bus companies drive prices down

Competition amongst top providers helps keeps travel prices down. Greyhound and Peter Pan buses have recently split, creating competition in the Northeast Corridor as well as smaller companies, like Boltbus and GoBus entering the scene. Megabus continues to offer very cheap prices around the country, as it does in the United Kingdom, and Jefferson Lines is still a major contender in the Midwest and the central US as well. This summer, European Market-Leader, FlixBus will also be entering the fray and will add even more competition between the leading bus providers

CheckMyBus, the international bus search engine, has compiled a ranking of Latin American countries, as well as the US, taking into account the prices of long-distance bus trips. This study not only helps visualize the cost of many South American countries but also contextualizes how affordable an American holiday can be by comparison.

After analyzing the value of the bus ticket per kilometer traveled, a significant difference between the average prices of the various countries became apparent. Brazil and Argentina, for example, have the highest ticket prices of the countries surveyed. Other destinations, such as Peru and Colombia, are cheaper by comparison, but the United States remains one of the best bargains in traveling and is second only to Chile in terms of low ticket fares.

The United States’ southern neighbor, Mexico, a popular destination for its beautiful beaches and ancient ruins, costs nearly twice as much per kilometer for travel by bus.