Frontier Strengthens Intent to Be Premier ULCC in the U.S.

Frontier Airlines announced its intent to order 134 A320neo Family aircraft from Airbus, which will triple the size of the low-cost carrier over the next 10 years. Valued at a list price of more than $15 billion, today’s announcement grows Frontier’s order book to more than 200 aircraft and means more than five thousand new, highly skilled jobs for the U.S.

These aircraft are part of the single largest Airbus order announcement ever made – a 430 aircraft order valued at a $49.5 billion list price by Indigo Partners, Frontier’s owner.

“Today’s announcement further strengthens our long-standing relationship with Airbus,” said Barry Biffle, president and chief executive officer for Frontier Airlines. “The A320 Family aircraft paves the way for us to continue to grow and modernize our fleet while helping us deliver on our mission to provide affordable travel across America. 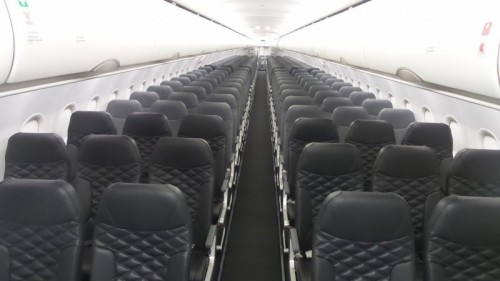 By 2026, we will be in a position to deliver Low Fares Done Right to more than 50 million passengers a year.”

“Frontier has been a great partner since 2001. We are happy to share in this historic announcement with them as they continue to grow, and to be part of their future,” said John Leahy, Chief Operating Officer Customers, Airbus Commercial Aircraft. “Airbus offers efficient aircraft that is a basis for their growth, and we are particularly proud to start delivering Frontier aircraft from our U.S.-based Mobile, Ala., production facility next year.”

This new 134 aircraft order is comprised of 100 A320neo and 34 A321neo aircraft. The A321neo will be a new complement to the carrier’s existing fuel-efficient A321 family fleet. The addition of these aircraft to the fleet will allow Frontier to grow in new and existing markets, provide even more compelling low fares, further improve the carrier’s already industry-leading fuel efficiency and maintain the company’s status of having one of the youngest and most modern fleets in the U.S. The 134 aircraft order announced today will be delivered between 2021 and 2026.

Today’s announcement underpins Frontier’s commitment to job creation throughout the U.S. The new aircraft means the addition of more than 5,000 new positions including pilots, flight attendants, and operations support. In addition, in 2018 Frontier will start taking delivery of aircraft from Airbus’ U.S.-based Mobile, Ala. production facility.

This new order will allow Frontier to continue its focus on achieving the lowest costs in the U.S. airline industry and utilizing these savings to lower fares. Earlier this year, Frontier announced a network expansion that makes the carrier’s low fares accessible to 90 percent of Americans.