The Boom in Kazakhstan 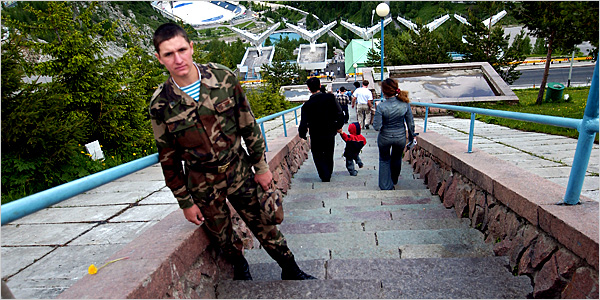 Though some people only know of Kazakhstan as the poor nation that the ridiculous character “Borat” comes from, The New York Times writes that it’s actually a country on the rise. Thanks in part to oil revenues, the nation’s largest city, Almaty, has experienced a surge in wealth and culture, and is becoming a hot spot. Here’s a piece from the article.

In short, Almaty is no longer a hardship outpost for the diplomats and the oil industry executives who still dominate the city’s visitor logs. Although the overwhelming percentage of visitors continues to be businesspeople, some have begun extending their stays to spend a weekend skiing above the Medeo winter sports complex, to visit nearby nature preserves (among them, the Charyn Canyon, which in breadth and sheer drama compares favorably to the Grand Canyon), or just to explore the city of nearly two million people. “Almaty feels raw, sketchy, and that can be fascinating,” said Brooke Arnao, the online video director for Money-Media, a New York publishing company, who stayed for a weekend after a conference.

But although the forested streets and urban parks create pleasant, verdant scenes in summer, the city has little of the Silk Road charm of neighboring cities like Samarkand and Bukhara in Uzbekistan. Much of Almaty’s architecture dates from the 1960s and ’70s, not a celebrated time in Soviet design. Still, there are several worthwhile city pilgrimages. The Russian Orthodox church in Panfilov Park, built entirely of wood — including the nails — sits across from the Artisan bathhouse, an opulent Soviet vision of the old take-to-the-waters remedy. The Almaty art museum has fine examples of contemporary Kazakh art, and the carpet sellers on the ground floor sell Kazakh rugs (a 4-by-10-foot carpet runs about 73,000 tenge, or $594, at 125 tenge to the dollar.)

You can read the rest of the article at NYtimes.com