More to See in Lisbon 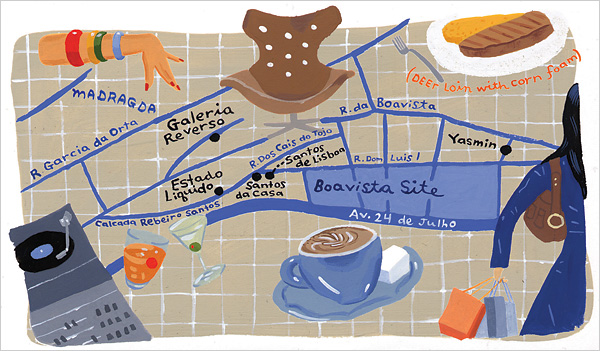 In a new travel article from The New York Times, writer Seth Sherwood writes about Lisbon, Portugal having much more to offer than most people realize. Lisbon, which is often over shadowed by bigger or better known cities in Europe, has just as many things to do and a wonderful culture of its own. Here’s a piece from the article.

For years, the best-known cultural contributions from this small seafaring nation were those stewed up in cauldrons from humble materials like squid and cod.

But that is changing, and no place embodies Portugal’s emergence as a serious design destination better than the waterside Santos quarter of Lisbon. The splashiest evidence is the Boavista site, where Norman Foster is designing a futuristic tower and commercial complex that will be filled with “galleries, studios, showrooms, exhibitions, performances, cinema, auditorium, cafes, shops, bars and restaurants,” in the words of its press materials. The goal is to create a project that “promotes the worlds of design and the arts.”

In the meantime, devotees of sleekness can genuflect before Santos da Casa (Avenida Dom Carlos I 49a, 351-21-395-2536), a loftlike emporium that showcases upstart Portuguese designers alongside Continental design icons like Poltrona chairs and Arne Jacobsen tea services. Especially impressive are Ana Pimentel’s sinuous J-shaped lamp in blond wood (163 euros, or about $243 at $1.49 to the euro) and Luísa Peixoto’s boxy chrome lamps adorned with red silk (180 euros).

Aluminum, plastic, cork, rubber and wood aren’t exactly the most dazzling ingredients in the jewelry trade — and that’s just the point for Paula Crespo, the proprietor of Galeria Reverso (Rua da Esperança 59-61, 351-21-395-1407; www.reversodasbernardas.com). “When you don’t use expensive materials, you can show more easily the artistic side of the piece,” she said. Ms. Crespo sells her own rings and brooches alongside those of judiciously chosen Portuguese and international peers. “If something is in gold, people just think it’s expensive. If it’s in plastic, it’s easier to show the creativity and innovation.”

Read the rest of the article at NYtimes.com