The Best Islands in the Caribbean 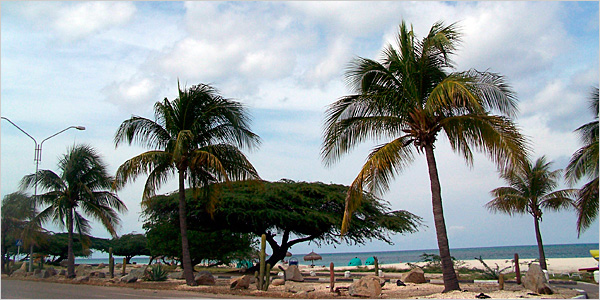 The New York Times recently sent several editors and writers to the Caribbean to find the best islands to go to, as well as the best places to stay and things to do on those islands. They narrowed down their list to thirteen islands, and have in-depth reports on each. Here’s a selection from the article on Aruba, by Barbara Ireland.

The Dutch influence is heavy in Aruba, which is officially part of the Netherlands, and Gouda cheese seems to appear on almost every menu. The regional specialty, though, is fresh fish, and you can sample some in the semicircular open-air dining room at Mango’s writeMarkerHTML(‘m48’);

map (J. E. Irausquin Boulevard 252; 011-297-527-1125; www.amsterdammanor.com), a romantic restaurant with cream-colored tablecloths and soft lighting from small hurricane lanterns. The almond-crusted baby snapper with creamed spinach and delicate coconut rice goes for $19.50, and comes with a view of the sunset at Eagle Beach.

map (Gasparito 3; 011-297-586-7044; www.gasparito.com), off the beaten track but worth the taxi ride, serves traditional Aruban food alongside more standard fare. Sit on the tiled terrace and try the Keshi Yena ($23), a concoction of shredded meat or fish and Gouda. For breakfast, try Délifrance writeMarkerHTML(‘m47’);

map fringed by tall palms and native divi-divi trees, are both standouts for swimming and sunning. But Eagle Beach, frequently praised as one of the best in the Caribbean, has the edge; it’s wider, quieter and less crowded. Splash in style in front of the pricey Divi Aruba resort (J. E. Irausquin Boulevard 41; 011-297-525-5200; www.diviaruba.com). Just don’t try to use the Divi’s beach chairs.

You can read the rest of the articles at NYtimes.com