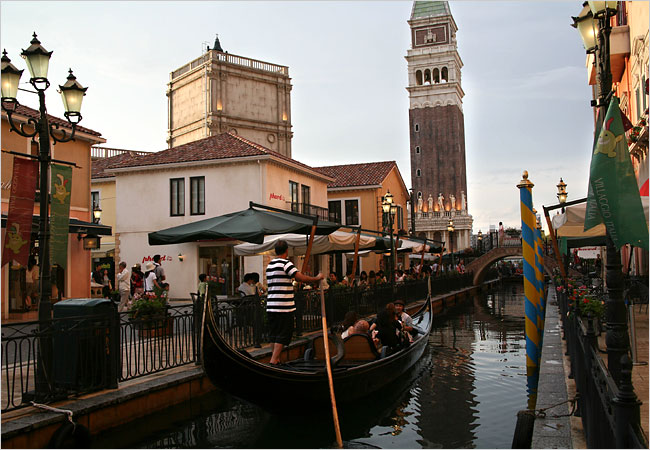 In Japan, it is not necessary to leave the country to feel like you are visiting another part of the world. All over Japan there are theme parks constructed for a foriegn experience. For example, Huis Ten Bosch in Nagasaki is just one of several Japanese theme parks, from Shima City to Nagoya, offering the opportunity to ride the gondolas of Venice or eat in Little Italy. You can also see the Dutch Towers of the Netherlands or have a picnic in the Madrid’s Plaza de Espana.

The parks can cost up to $2.5 billion dollars to create but are worth the investment because they create a lot of traffic. Japan’s desire to travel outside the country was a result of Japan’s “bubble economy” in the 1980’s and now, travel is becoming a large part of Japanese culture. The parks make it possible for those that do not have enough time or money to travel to still see the world. For only $42 or 4800 yen, you can buy a ticket of entry, called a passport, and instantly feel like you have left Japan. All the exhibits in the parks are made to feel authentic; the point is that even if you have gone to Italy, seeing the Italian section of the park will make you feel like you are there again, and not just seeing a model of the country.

“Rather than the broad pastiche that characterizes, say, Disneyland, the mini-monuments of Japan’s cultural theme parks are faithful reproductions executed with stunning accuracy. From bricks to tiles and balcony railings, many of the parks import their raw materials directly from Europe. The crowds won’t come unless it’s real,’ said Mr. Fujiwara. “It’s very important to us that somebody who has been to Italy can come here and feel like it’s the real thing.” As the parks are attracting millions of visitors a year, some of Japan’s longing for traveling seems to be satisfied.